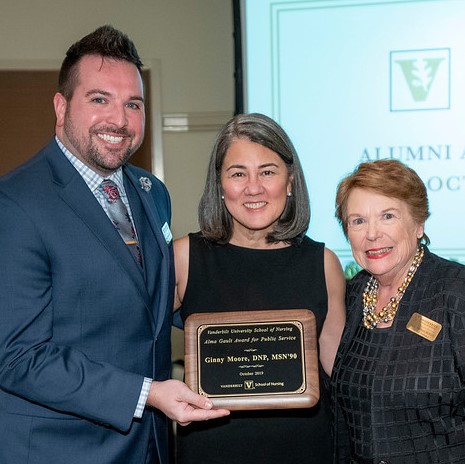 Ginny is director of VUSN’s women’s health specialty.  Her first practice role with VUSN was at DeeDee Wallace, where she established a health clinic for adolescents in residential state custody, and served as the sole NP.  For her DNP project, she focused on increasing the communication skills of vulnerable women, starting with survivors of domestic violence, prostitution, addiction and homelessness at Magdalene here in Nashville, where she helped develop their confidence and trust when interacting with health care providers.  She replicated her project at The Next Door, a transitional residence for women recovering from addiction and mood disorders.

Her interest in serving the underserved women of Nashville has brought her to other organizations such as The Clinic at Mercury Court and All About Women.  Ginny volunteered at the Sexual Assault Center’s crisis line and encouraged VUSN students to do the same.  But, the organization’s training program was a barrier for distance students, so Ginny developed a curriculum that allowed our non-local students to take part.

Ginny is a key faculty member on a HRSA grant for Sexual Assault Nurse Examiner training, to nationally increase the number of SANE-certified professionals administering care for survivors of sexual assault, collecting evidence and providing legal testimony, especially in rural and underserved areas. 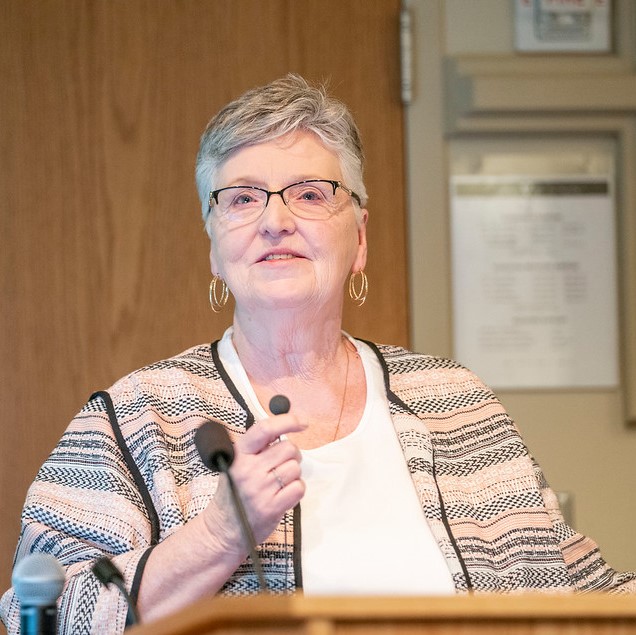 Marlee is the administrative director for neonatal services at the Monroe Carell Jr. Children’s Hospital at Vanderbilt, where she oversees a team of nearly 400 staff.  She is known for encouraging innovative patient-centered ideas from her colleagues by hosting town hall meetings, annual staff retreats and a monthly collaborative meeting that includes physicians, nurse practitioners, pharmacy, dietary, social work, case managers, quality and safety, physical therapists, child life specialists and nursing.

Marlee’s desire to improve patient outcomes has resulted in numerous innovations at Vanderbilt.  These include creating single-patient rooms so families can stay with their babies, training newborn nursery and NICU nurses to be certified lactation counselors, and developing a donor breast milk program for NICU and pediatric cardiac ICU patients.

Marlee advocated for a NICU nurse to complete the End of Life Care Train the Trainer program; that nurse is now offered throughout VUMC on a regular basis. 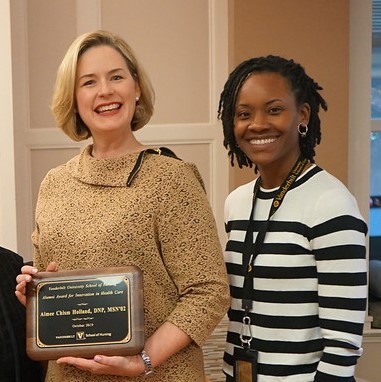 Utilizing her clinical practice expertise performing office gynecology procedures and her desire to increase and expedite women’s access to specialty care, she created one of the very first gynecology skills workshops for primary care NPs utilizing clinical practice simulations.  This workshop provides an opportunity for NPs to practice, refine and validate office gynecology skills in an environment conducive to learning.

These workshops have been attended by well over 2,500 NPs, PAs, midwives and physicians at numerous national and regional conferences.  Aimee recently received a grant to provide a telehealth gynecology skills workshop for rural primary care providers. 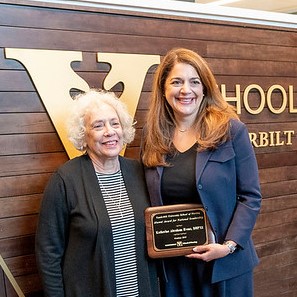 Katherine is the chief nursing officer at United Healthcare, where she goes the extra mile to facilitate collaboration between United Health Group and the Gerontological Advanced Practice Nurses Association, building and strengthening preparation of the advanced practice nursing workforce to care for an aging population.

As president of GAPNA, Katherine led the organization to create a national certification exam for the gerontological advanced practice nurse specialist, identifying APRNs who have the experience, knowledge and skills to manage frail older adults with complex health issues.  She was an important contributor throughout the process of writing the exam, administering pilot testing and delivering its first testing.

Katherine continues to be heavily involved in the work of GAPNA, giving presentations at its annual national meeting and serving on its Leadership Institute steering committee.  She is a mentor and helps colleagues strengthen their leadership skills within the gerontological advanced practice nursing community.

She received the University of Memphis School of Nursing "50 Leaders in 50 Years" award, was selected as a fellow of the American Association of Nursing Practitioners, and has been identified as a content expert by the Iowa John A. Hartford Center of Geriatric Nursing Excellence. 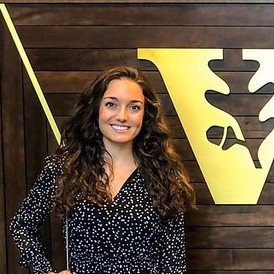 According to one of her colleagues at the University of South Florida where Christina is director of advanced practice providers, her professionalism quickly garnered her the respect of her physician partners as a fully engaged colleague and peer.  Christina was able to break down boundaries, demonstrating to her physician partners the value an expansion of the traditional nurse practitioner’s scope of practice brought to their practice.

Her DNP project from VUSN helped to significantly reduce the 30-day readmission rate for atrial fibrillation and Christina became the first published nurse practitioner in the USF Department of Cardiology with her related publication in Heart & Lung. 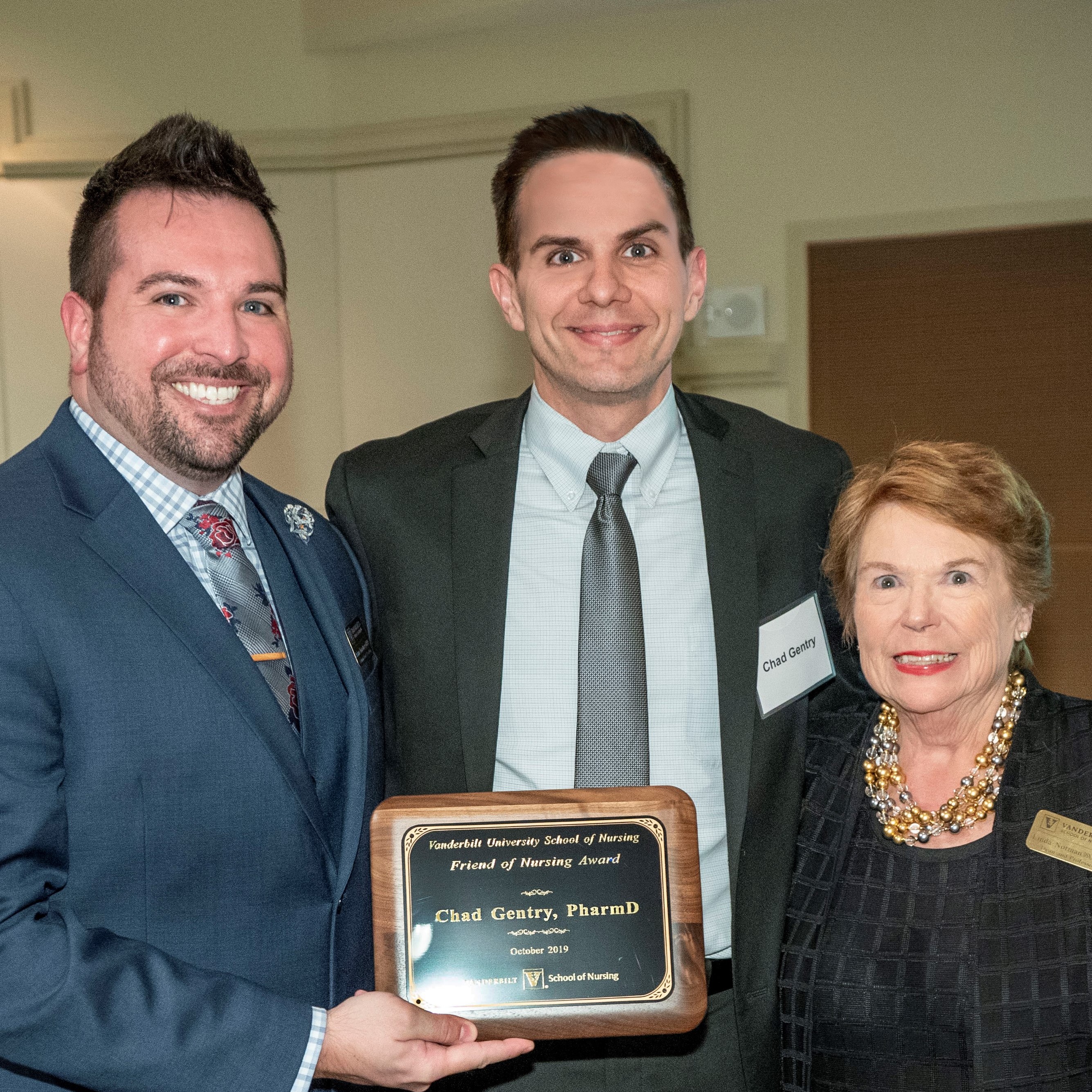 Chad is an associate professor at the Lipscomb University College of Pharmacy.  He is known as an advocate of collaborative care in both the clinical and academic setting, and has been influential in shaping the interprofessional practice environment in Davidson County and throughout Tennessee.

Chad partnered with the School of Nursing during the creation of the Clinic at Mercury Courts.  He has worked closely with VUSN to integrate pharmacy into clinical care while respecting the desire to maintain the clinic’s nurse-led philosophy.  Along the way, he has become an outspoken advocate for nursing and its unique perspective on health care.

Chad is on the faculty of the Vanderbilt Program for Interprofessional Learning and the Meharry-Vanderbilt Interprofessional Student Collaborative.  He is in high demand as a contributor because of his passion and commitment for collaborative practice, and his belief that the key to health care reform is through educating the next generation of providers in the skills needed to breakdown practice silos and work together as equal members of the health care team.

One of Chad’s nominators said this about him: “His work is not only shaping clinical pharmacy today but is also the model for the interprofessional provider of the future. Most importantly, his respect, commitment and loyalty to our profession make him a true friend of nursing.” 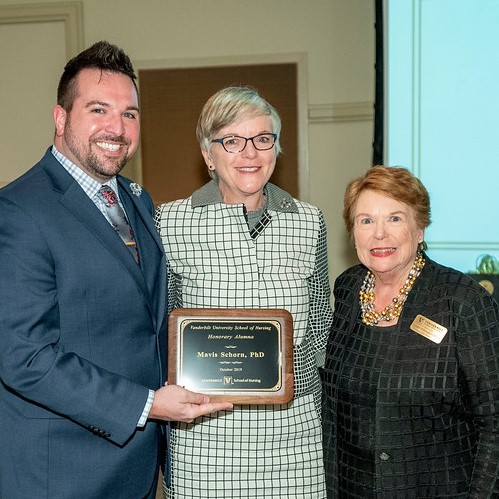 Mavis is the senior associate dean for academics at VUSN as well as a professor and a nurse-midwife in the School’s faculty practice.  Since she arrived at our doorstep in 2002, she has been a tireless advocate for Vanderbilt nursing students and the role of nursing within the health care arena.

As a clinician, faculty member and researcher rolled into one, Mavis has been an asset to VUSN, first as associate professor and then, in 2006, as director of our nurse-midwifery specialty.  Her visionary leadership and management skills elevated our nurse-midwifery program to Number 3 in the nation as ranked by U.S. News & World Report.

Mavis was promoted to senior associate dean in 2013 and continues to practice as a nurse-midwife in Nashville.  She is an advocate for interprofessional education.  She is also the principal investigator on a $1.43 million HRSA grant to develop and implement a Sexual Assault Nurse Examiner program for emergency NP students, thereby increasing the number of SANE-trained and certified APRNs in emergency departments in rural or underserved communities in the U.S.

Mavis is widely published, is a fellow in the America College of Nurse-Midwives, and has received many awards, such as the VUMC Credo Award.  Her academic degrees are from UT Austin, Texas Women’s University and University of Kentucky. 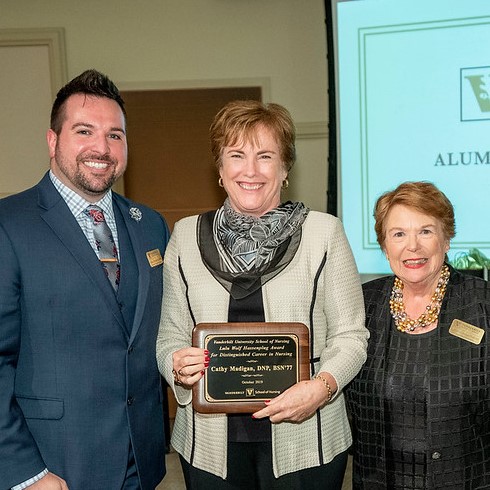 Cathy is the chief nurse executive for the University of North Carolina Health Care System and associate dean for practice at the UNC Chapel Hill School of Nursing.  She joined UNC Hospitals in 2003 as director of cardiac services and, in 2013, was promoted to vice president of nursing and associate CNO.  She took on the responsibility of supervising all of the system’s nursing enterprises as well as quality and patient satisfaction initiatives for UNC Hospitals.  That was no small feat.

Prior to coming to UNC, Cathy served as director of the children’s cardiac program at the Denver Children’s Hospital and then at the Children’s Hospital of Philadelphia.  She has authored and co-authored numerous articles in nursing and medical peer-reviewed journals and served as principal and co-investigator for clinical research.  In 2007, Cathy was recognized as one of the Great 100 Nurses of North Carolina.

Her nominator said that Cathy “has always brought enthusiasm, intelligence and dedication to everything she does in her personal and professional life.  She embodies what VUSN teaches and the expectations VUSN instills in students/alumni while being an engaging and effective leader, parent and nurse.”