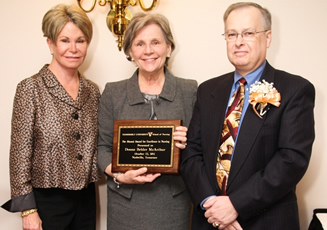 The Alumni Award for Excellence in Nursing is presented annually to a Vanderbilt University School of Nursing graduate who is a national or international leader in nursing issues.

Donna McArthur, PhD, FNP-BC, FAANP, has shown a continued commitment to the education of advanced practice nurses at the local and national levels. She teaches and mentors students in her current position as director of the Doctor of Nursing Practice program at Vanderbilt. She has been a member of the National Organization of Nurse Practitioner Faculties for more than a decade and is currently serving on the curriculum leadership committee and on a number of committees for other national nurse and nurse practitioner organizations. McArthur has received numerous awards and honors, including the Excellence in Teaching Award from the University of Arizona College of Nursing. In 1999, McArthur received a Robert Wood Johnson Foundation grant to participate in a national program aimed at developing a model for educating nurse practitioner students in a managed care setting. 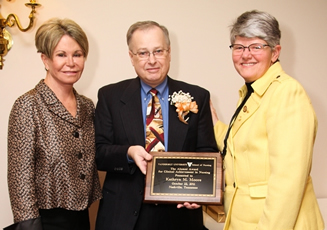 The Alumni Award for Clinical Achievement in Nursing is presented to a Vanderbilt University School of Nursing graduate for proficiency in clinical, patient-centered practice.

Kate Moore, RN, DNP, ARNP-BC, is currently an assistant professor at the University of Kentucky College of Nursing where she teaches in the Doctor of Nursing Practice Program and maintains a practice as an acute care nurse practitioner. She has improved quality of care as well as advancing educational experiences for nursing and medical students. A colonel in the United States Army Reserve, Moore continues to serve on the Tri-Service Nursing Research Advisory Council, which reviews all Tri-Service nursing grants and makes funding recommendations. The council also provides input to the military nursing research agenda. While serving on active duty, Moore was the head nurse for a 25-bed ICU at the busiest United States Army trauma center in Iraq. She also was a leader of a burn care training course for Iraqi physicians and nurses. Moore has presented 17 papers in regional, national and international forums. She is an American Association of Critical-Care Nurses Ambassador and a Sigma Theta Tau International Virginia Henderson Fellow. Moore is pursuing a Ph.D. and has received grants from the MedEVAC Foundation International. 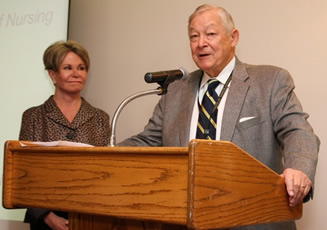 The Friend of Nursing Award recognizes significant local or national contributions to the profession of nursing from an individual who is not a nurse or Vanderbilt University School of Nursing alumnus.

Robert E. McNeilly Jr. is a dedicated supporter of Vanderbilt and the School of Nursing. He served as the Vanderbilt Reunion chair for the Class of 1954 and as the founding co-chair of the Coalition for the Canby Robinson Society, a fundraising committee that supports all areas of Vanderbilt University Medical Center. He is the past president of the Canby Robinson Society, past co-chair of the Shape the Future Medical School Scholarships Committee, and past president of the Vanderbilt University Alumni Association.

McNeilly makes a practice of investing in and promoting scholarships for nursing students as a way to prepare for a brighter health care future. McNeilly was recognized by Dean Conway-Welch for his efforts on behalf of nursing as a past chair of the Julia Hereford Society. He was one of 12 co-founders of Pinnacle Financial Partners in 2000 and serves on its board of directors. He is the chairman of the Metropolitan Action Commission and a board member of Montgomery Bell Academy and the Tennessee Performing Arts Foundation. 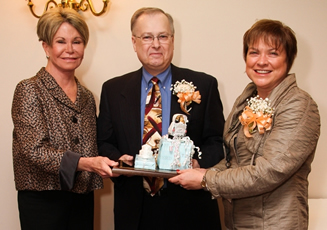 The Honorary Alumnus is awarded by the Vanderbilt School of Nursing Alumni Association in recognition of significant contributions to the nursing school by an individual whose academic credentials were obtained elsewhere.

Barbara A. Murphy, MD, is associate professor of medicine in the Division of Hematology/Oncology and director of the Pain and Symptom Management Program at Vanderbilt University Medical Center. She is a medical oncologist who specializes in head and neck cancer as well as pain and symptom management control. Murphy’s respect of nurses as colleagues fosters a healthy exchange of ideas.

VUSN Senior Associate Dean Ann Minnick writes, “Dr. Murphy has been a supporter and research mentor for School of Nursing faculty, postdoctoral fellows and predoctoral students. Her efforts have increased our participation in interdisciplinary projects at the Vanderbilt-Ingram Cancer Center. She has a true appreciation of nursing research, including the ability of nurses to be principal investigators. In addition to her championship of nursing efforts to assist patients with pain and symptom management, she has served as a role model of compassionate care especially in her area of specialization, upper digestive cancer.” 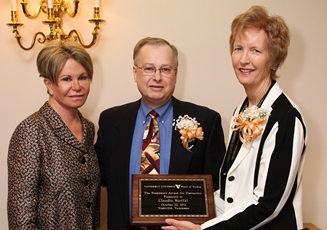 The President’s Award of Distinction is presented this year to two graduates of the Vanderbilt University School of Nursing who are recognized for distinguished contributions to nursing and to their communities.

Claudia Stoffel, MSN, has excelled in meeting the challenges of providing nursing care, innovative nursing education and nursing leadership on local, national and international levels. She began her nursing career on a pediatric oncology unit at the National Institutes of Health. In 1992, she found her true calling when she began teaching in the associate degree program at what is now West Kentucky Community and Technical College. She became a full professor in 2008 and is currently the program coordinator for the college’s Practical Nursing Program.

Stoffel has contributed to nine textbooks. She was twice an item writer for the National Council for State Boards of Nursing licensure exam for registered nurses in 2010. She has also been published in RN Magazine and Exceptional Parent magazine.

In 2004, Stoffel presented a four-day course to nurses and physicians in Mexico on meeting the needs of terminally ill patients. She administers a refresher course for registered nurses that she developed and instituted. 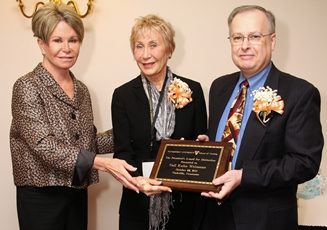 Gail Kuhn Weissman, EdD, RN, FAAN, earned her master’s degree from Columbia University while working full time in pediatrics and surgery and later as a supervisor. She went on to earn her doctoral degree while vice president, nursing, and associate director of inpatient services of the Mount Sinai Hospital and Medical Center in New York City. She is in Columbia University’s Nursing Hall of Fame. The New York State Nurses Association awarded her the McMullen-Isani Award for Distinguished Service to Nursing and the Jane Delano Distinguished Service Award.

Her interest in improving nursing care has led her to Nigeria, China, Romania, the Dominican Republic, Russia, Chile and Japan for consultations and presentations. She has authored and co-authored more than 30 articles in professional journals. Interest in nursing research is seen in her board membership at the Harvard Nursing Research Institute at the Harvard School of Public Health.

Since her retirement, she has developed and taught leadership and change management courses to senior health care administrators and nurse managers. She also teaches classes on resolving management conflict in the workplace, quality issues, the patient service connection and project management.