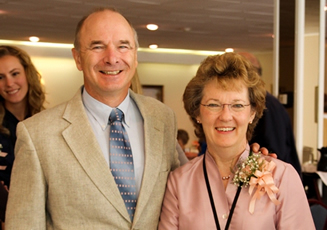 The alumni award for Excellence in Nursing is presented annually to a graduate of the Vanderbilt University School of Nursing who is a national or international leader in nursing issues.

Ann Tescher is a clinical nurse specialist (Surgical/Trauma Intensive Care Unit) and a Researcher Engaged in Practice, in the Department of Nursing at Mayo Clinic. She is an assistant professor of nursing, Mayo Clinic College of Medicine.

Dr. Tescher has served as a long-standing mentor and represents Mayo Clinic at international nursing conferences. She is recognized for multi-disciplinary collaboration in practice, quality improvement, and research.

A commander in the Navy Nurse Corps, Captain Tescher transferred to Retired Reserve on December 1, 2008. She has four Navy/Marine Corps Commendation Medals and one Navy/Marine Corps Achievement Medal. Tescher reported to duty March 5 in the intensive care unit at the Navy Hospital in Bremerton, Washington.

The Alumni Award for Clinical Achievement in Nursing: Anne A. Moore, BSN '76, MSN '81 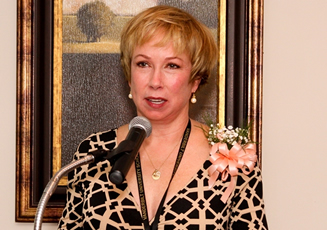 The alumni award for Clinical Achievement in Nursing is presented to a graduate of the Vanderbilt University School of Nursing for proficiency in clinical, patient-centered practice.

Robert Taylor was husband to Ann Schuh Taylor, BSN '51. They spent 55 years together and Dr. Taylor always said that his wonderful wife, Annie, was his best friend. He said, "Vanderbilt University School of Nursing enhanced her basic personality of service and gave her the abilities she needed to effectively touch the lives of so many people. Her first love was pediatrics followed by public health nursing." Dr. Taylor cherishes the VUSN as he believes that the School played a very important role in his life and in the life of his family.

Taylor invested in the renovations of the Godchaux Hall Living Room is his late wife's honor because he and his wife had "courted there for 18 months" and he has sweet memories of laughter and friends. Also, as a memorial to his wife who passed away in 2007, Dr. Taylor established a scholarship fund in memory of his wife to make it possible for future deserving nursing students to have an opportunity of the education that was so important to her.

Taylor is a Vanderbilt University graduate and is a retired bio-chemist from the University of Alabama. The Taylors have two children and four grandchildren. 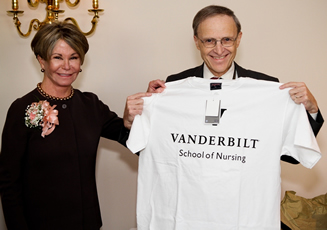 The Honorary Alumnus is awarded from time to time by the Vanderbilt University School of Nursing Alumni Association in recognition of significant contributions to the nursing school by an individual whose academic credentials were obtained elsewhere.

According to Whitney Wormer, MSN '03, "Dr. Gwirtsman has been a wonderful asset to Vanderbilt University School of Nursing. Students who have had the pleasure to work with Dr. Gwirtsman as part of their clinical experiences recall how encouraging he has been to them as they gain their psychiatry skills and how much of an expert he is in delivery of care."

Gwirtsman is celebrating this honor today with his wife, Karen Rosenthal-Gwirtsman, MSN '02. 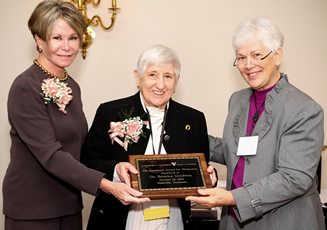 The President's Award of Distinction is presented to graduates of the Vanderbilt University School of Nursing who are recognized for distinguished contributions to nursing and to their communities.

After graduating from Vanderbilt in 1955, Beatrice Goodwin went on to earn a doctorate at New York University College of Nursing where she received their prestigious Founder's Award.

Dr. Goodwin is spearheading the New York University College of Nursing's work in Latin America on curriculum consultation for 28 universities in Colombia, Argentina and Chile. Dr. Goodwin assists faculty in critiquing and revising their curricula. In addition, she has worked in Bogota, Colombia, assisting faculty in the design of basic research on elder care. She helped two Colombian universities develop master's programs in geriatric and mental health nursing. At a new university, in Bucaramanga, Colombia, she has helped a nursing program become the first department to be nationally accredited.

Goodwin has served as Chief Nurse, Aeromedical Evacuation Flight with the New York Air National Guard; professor of nursing and department chairperson at Herbert H. Lehman College in Bronx, NY; Senior Advisor to the Dean at the New York University College of Nursing. In 2008, NYU College of Nursing honored Goodwin as the Distinguished Nurse Alumna.