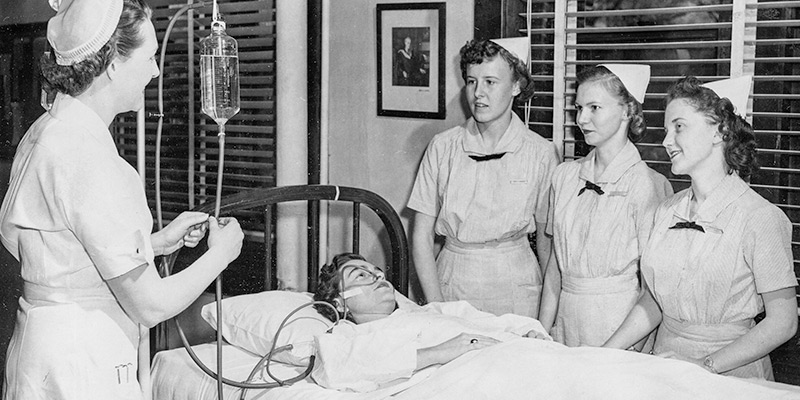 Tradition and innovation combine in our School’s rich history where we are recognized for our leadership in preparing professionals for nursing practice, leadership, education and scholarly activity.

With a history dating back to 1908, Vanderbilt University School of Nursing has a long-standing reputation for excellence in nursing teaching, practice, informatics and research. As one of the first five schools to receive Rockefeller funding to implement the Goldmark Report of 1923, the School of Nursing was a leader in drastically altering the nature of nursing education and moving it into institutions of higher learning. The School began offering the Master of Science in Nursing (MSN) in 1955. It was one of the first to launch a PreSpecialty program in 1986 allowing students who hold non-nursing degrees to enter the MSN program without repeating undergraduate classes. This permitted an accelerated path to the master’s degree. Vanderbilt’s Bachelor of Science in Nursing degree, first conferred in 1935, was restructured into the PreSpecialty program as one of several innovative entry options.

In 1993, Vanderbilt School of Nursing established the PhD in Nursing Science program, leading to nursing research and scholarly activity that has positively impacted health care delivery in a variety of areas. The Doctor of Nursing Practice Program began in August of 2008. The inaugural class of 31 students graduated in 2010.

Over the years, Vanderbilt School of Nursing has established MSN programs of study in numerous advanced practice nursing specialty areas. The School’s Family Nurse Practitioner (FNP) program, for example, begun in 1975, is considered among the oldest and most progressive in the country – boasting cutting-edge clinical practice sites and extensive scholarly and research opportunities that give FNP students an advantage in developing as advanced practice nurses. The School also was one of the first to develop the role of Psychiatric-Mental Health Nurse Practitioner (Lifespan) (FPMHNP) and has added dual focus programs and dual degrees that combine educational areas such as Nurse-Midwifery/FNP.

Beyond its educational offerings, Vanderbilt School of Nursing’s tradition of excellence includes a focus on integrating technology into the classroom and into clinical practice. The Frist Center for Nursing Informatics opened in February 2005 provides advanced computer facilities and support technologies. The School operates one of the most extensive faculty practice networks anywhere, including community-based clinics that provide primary care to underserved populations. Vanderbilt nursing graduates can be found across the nation and in numerous foreign countries. The School attracts students from most of the 50 states. Its partnership with Vanderbilt University Medical Center provides excellent opportunities for education, research and clinical practice.

From July 2008 to June 2009, the School of Nursing celebrated it's centennial year taking great pride in our accomplishments and deep appreciation for the students, faculty, staff and alumni who contributed greatly to nursing education and research, and to the profession of nursing. More >