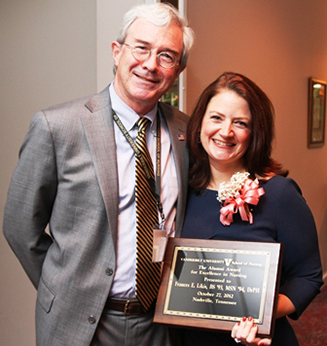 The Alumni Award for Excellence in Nursing is presented annually to a graduate of the Vanderbilt University School of Nursing who is a national or international leader in nursing issues. Frances Likis is specifically recognized for her dedication to evidence-based best practice and contributions to knowledge in the challenging domain of women’s health care.

This dedication is particularly visible in her work as a co-editor of Women’s Gynecological Health currently in its second edition. The book has twice received the Book of the Year Award from the American College of Nurse-Midwives (ACNM).

The results of her independent and collaborative work have been published in well-respected, peer-reviewed journals. The results have been cited as evidence in support of the adoption of policy directives that benefit women’s health clinicians and the women and families whom they serve. She was the recipient of the highly competitive Kitty Ernst Award given to young professionals by the ACNM for creative and innovative work in women’s health. At the University of North Carolina, Likis was selected for the Royster Society of Fellows, a multi-year fellowship program for the most promising doctoral students across all of the university’s graduate programs. Likis was named as a VUSN Top 100 Leader during the school’s centennial celebration. In 2012, she was inducted as a fellow of ACNM.

Likis was deputy editor before assuming the post of editor-in-chief of the internationally respected Journal of Midwifery and Women’s Health in 2008. As such, she works closely with a wide variety of researchers and clinical writers, mentors new writers, organizes special issues of the journal, and now includes representatives of other professional groups on the editorial board. Recent reports indicate that the profile of the journal has significantly risen thanks to Likis’ hard work and visionary insight.

Likis has had an unconventional, yet highly influential career in which she has distinguished herself as a national nursing leader in midwifery and women’s health. She is an asset to her profession and nursing in general. 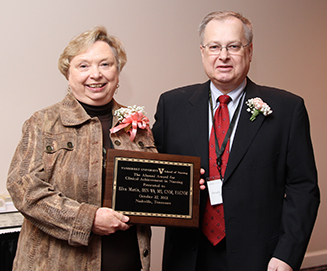 The Alumni Award for Clinical Achievement in Nursing is presented to a graduate of the Vanderbilt University School of Nursing for proficiency in clinical, patient-centered practice.

As a staff nurse, head nurse in labor and delivery, and certified nurse midwife, Ellen Martin has been caring for women and infants during the perinatal period for more than 40 years and has delivered more than 4,000 babies.

Martin created the role of nurse midwife in OB/GYN practices in Dalton, Ga., and Atlanta in the 1970s and 1980s. She was director of nurse midwifery at Southeastern Health Service/Meridian Medical Group in Atlanta for 17 years. She was one of the first nurses/midwives to deliver babies at Northside and West Paces Ferry hospitals in Atlanta, and was one of the first nurses to serve on hospital committees while in this position.

Martin has supported the education of nurse-midwives as a preceptor for students from several schools and as a faculty member at Emory University. Her devotion to mothers and babies has never wavered, even as nursing and nursing’s role in midwifery changed. She has been a leader not only in the practice and establishment of midwifery in the hospital and in private practice, but also in her professional associations. She is a member and fellow of the American College of Nurse Midwives (ACNM), serving locally in Atlanta and the state of Georgia as well as nationally. Her recent leadership position has been with the ACNM Foundation, raising money for student scholarships and grants. She has served on the board as vice-president, president and treasurer. Her long history on the foundation has brought great understanding of the importance of a foundation as an investment for midwifery.

Once asked about her practice, Martin shared that she is now delivering the children and grandchildren of some of her former clients and patients. This speaks well of her caring attitude and her commitment to her patients generation after generation. 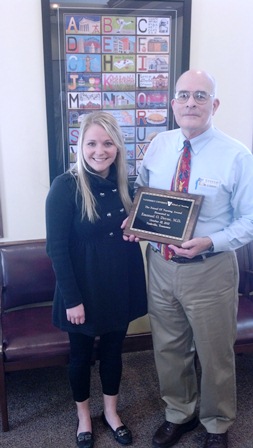 The Friend of Nursing Award recognizes significant local or national contributions to the profession of nursing from an individual who is not a nurse or Vanderbilt University School of Nursing alumnus. Dr. Emanuel Doyne has been a community pediatrician in Cincinnati since 1976 after serving as a pediatrician (major) in the United States Air Force for two years. He is a well-respected pediatrician in the Cincinnati area and is passionate about teaching medical students, residents and nurse practitioners alike.

Doyne is an adjunct professor of pediatrics at Cincinnati Children’s Hospital Medical Center (CCHMC). Since 2009 he has trained 12 pediatric or family nurse practitioner students from various colleges, including University of Cincinnati, St. Louis University, Otterbein University, Wright State University and Vanderbilt University. The nurse practitioner students he has trained have positively impacted the greater Cincinnati community. One is a nurse educator in the PICU at the CCHMC; one is the care coordinator for tracheostomies at CCHMC; several are employed in the emergency department, and others are in private practice in Cincinnati. Doyne is also a lecturer for the University of Cincinnati in the College of Nursing Pediatric Nurse Practitioner Program. He is a leader in the medical field in Cincinnati, and he has made it his goal to teach and guide nurse practitioners with the hopes of advancing patient care and changing the patient outcomes.

Doyne is very active in the world of pediatrics and has broadened his world of teaching to include nurse practitioner students. He is a trail blazer, setting an example for physicians everywhere with the hope that this will greatly impact their acceptance and utilization of nurse practitioners to better patient care for the pediatric populace. 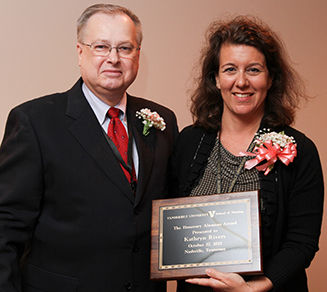 The Honorary Alumnus/a is awarded by the Vanderbilt School of Nursing Alumni Association in recognition of significant contributions to the school by an individual whose academic credentials were obtained elsewhere. The Honorary Alumnus/a for 2012 is Kathy Rivers, VUSN director of communications and editor of The Vanderbilt Nurse magazine. Below are some comments about Rivers from the leadership at the VUSN:

Becky Keck, senior associate dean for operations and administration and chief administrative officer: “Kathy has a strong commitment to the school and is gifted in reflecting a very positive image of the school in all that we do. She defines the word professional in everything that she does.”

Linda Norman, senior associate dean of academics: “Kathy has become so familiar with our work that she can ‘think like a nurse’ now. She has learned about the nuances of the different specialties in the M.S.N. program, and the D.N.P. and Ph.D. programs.”

Bonnie Pilon, senior associate dean for clinical and community partnerships:  “Kathy is always available, enthusiastic, and committed to each and every community-based program that VUSN offers. She gives wise counsel on how best to tell our story and to whom it should be told. She is always upbeat, positive, cheering on my team of providers who often work with patients and families living in some of the poorest conditions in Middle Tennessee. Kathy embraces it all. She is one of us in the most fundamentally important ways. We could not be successful without her efforts on our behalf and her belief in what we do. Bravo, Kathy!”

Sarah Ramsey, assistant dean for student affairs: “Kathy has exceeded the expectations of everyone as VUSN director of communications and taken the position to a new level. I cannot think of anyone more deserving of this award.”

Mavis Schorn, assistant dean for academics: “Kathy has had an integral role in elevating the nurse-midwifery program from No. 13 to No. 3 in the country. Her continual identification of select media opportunities for nurse-midwifery faculty or students has provided a national influence on exposure for the program. Kathy is highly-appreciated and an asset to the VUSN!”

Betsey Usher, program manager: “Kathy attends a large number of events hosted by faculty, staff or students with her notebook and a photographer. Through her efforts, Kathy has indeed put the School of Nursing in the spotlight, both on campus and beyond.” 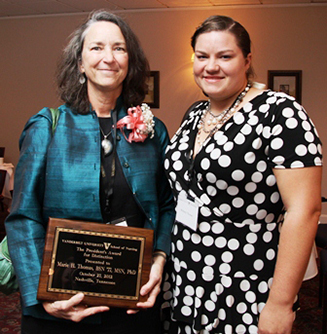 The President’s Award of Distinction is presented to a graduate of the Vanderbilt University School of Nursing who is recognized for notable contributions to nursing and to the communities.

Marie Thomas works tirelessly to promote nursing, never being satisfied with the “status quo” while seeking to improve outcomes in the associate degree nursing program at Forsyth Technical Community College in Winston-Salem, N.C. After receiving her Ph.D., she obtained national nurse educator certification. She has been teaching for more than 20 years. Thomas has served as president of the faculty senate at Forsyth and she was recently selected as one of North Carolina’s Great 100. She presented a poster on pacing strategies for taking the NCLEX-RN at the 2008 National Organization of Associate Degree Nursing conference and was selected to participate in the NCCC Leadership Program in 2011.

Thomas has published articles in three peer-reviewed journals, authored one chapter and edited chapters in 15 textbooks since 2007. She serves on many professional, college, division and departmental committees, including those related to computers, technology, research, distance learning, testing and curriculum.

Upholding the integrity of nursing and encouraging student success has been demonstrated by Thomas in numerous ways. Utilizing ATI resources, she implemented program-wide changes which resulted in a 100 percent NCLEX-RN pass rate. She spends many hours working with students individually to ensure their success. Her students attest that they are challenged by her expectations, yet encouraged by her methods.

Thomas exemplifies caring and commitment to community service while volunteering every week for the past six years at a local elementary school tutoring children. She has participated in the Foundation for Hospital Art, traveling to Ireland, Pakistan and France. Whether assisting students and colleagues on an individual basis, teaching or representing nursing in the community, Thomas exemplifies the essence of a professional educator.