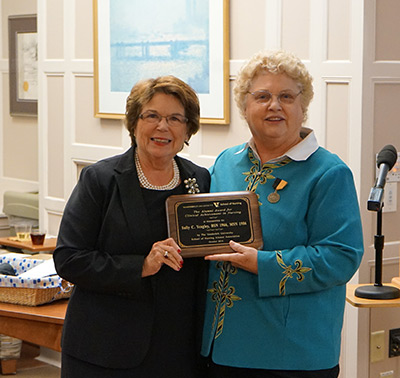 The Alumni Award for Clinical Achievement in Nursing is presented annually to a graduate of the Vanderbilt University School of Nursing for outstanding contributions in clinical, patient-centered practice. This year’s recipient is Sally Yeagley.

Upon receiving her BSN from Vanderbilt in 1966, Sally joined a private obstetrical practice in Nashville, and, as a full partner – which was unique at the time – implemented her vision for patient-centered maternity care. She initiated a program (approved by the Tennessee State Regulatory Board) to allow children to be present in the birthing room—and she played a vital role in opening the first birthing room in Tennessee, at what was then Hendersonville Hospital.

Sally came back to Vanderbilt to receive her MSN in 1986. She is credentialed in reproductive health and specializes in the care of infertile women and women who have experienced sexual abuse. One of her nominators said, “Sally was an advanced practice nurse before we even coined this term, and remains a clinical leader and role model for those who are coming along today.” Another nominator made the observation that she “is known for her loving spirit, gentleness, thoroughness and sense of humor.”

Sally is being honored today by VUSN for her dedication to a vision, ability to sell that vision to colleagues at all levels, and capacity for making that vision a reality. Because of her, the birthing process in Tennessee has been greatly improved.

Alumni Award for Excellence in Nursing 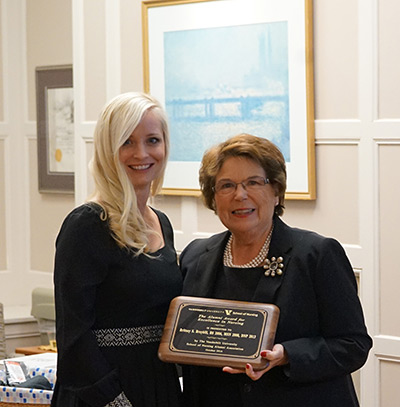 The Alumni Award for Excellence in Nursing is presented annually to a School of Nursing graduate who is a national or international leader in nursing issues. This year’s recipient is Britney Broyhill.

Britney did her undergraduate work at Vanderbilt, and graduated with her MSN in 2008, and her DNP in 2013. At Carolinas HealthCare System, she has developed the largest post-graduate transition-to-practice NP training program in the country. And, when she discovered there was no post-graduate APRN fellowship credentialing body, she organized APRNs from across the U.S. to create the Association for Post Graduate APRN Programs.

Britney has published extensively, speaks at conferences, has testified before the National Institute of Medicine regarding the Future of Nursing report, and actively lobbies for full practice authority in North Carolina. One of her nominators said, “Dr. Broyhill’s work and dedication to all of the nursing initiatives she’s involved with, result in benefits felt by so many in the profession.” Another wrote, “She is actively working to change the perception of ‘mid-level providers’ to catapult them to being recognized as providers on the front line of medicine that are making a difference in patients’ lives.” 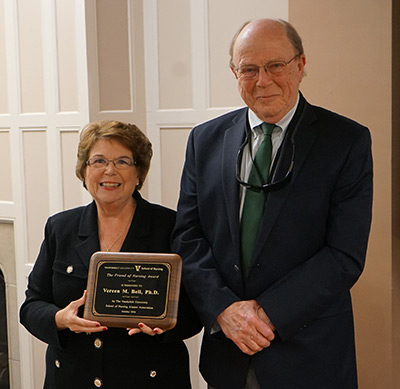 The Friend of Nursing Award recognizes significant local or national contributions, or both, to the profession of nursing from an individual who is not a nurse or Vanderbilt University School of Nursing alumnus. This year’s recipient is Vereen Bell.

Vereen has taught at Vanderbilt since 1959 as a professor of English (now Emeritus). He has received numerous teaching awards, published multiple books and articles, and lectured internationally. He taught Advanced English to members of the VUSN Class of 1966, a course that, as one nominator said, “Began the process of learning to think critically, an altogether new experience that we have carried forward in our lives as nurses and humans in the world. He was the epitome of the reasons we were at Vanderbilt – intellectual stimulation and a beacon for where we might go in the world.”

Another member of the Class of ’66 said, “In my two working careers and in my personal interest, my working and communicating have benefitted from those early lessons in Dr. Bell’s class.” A third nominator added, “I often reflected on Dr. Bell’s uncompromising expectations, which I tried to emulate when I was teaching nursing students.” 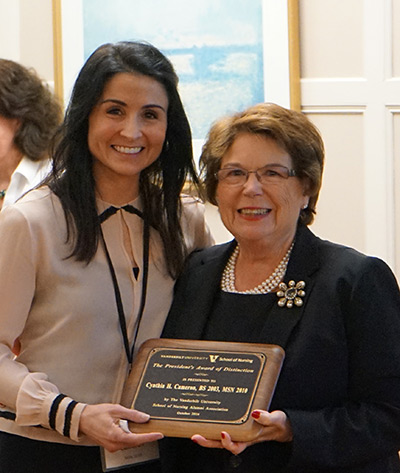 The President's Award of Distinction is presented to a graduate of the Vanderbilt University School of Nursing who is recognized for distinguished contributions to nursing and to the community. This year’s recipient is Cynthia Cameron.

Cynthia completed her undergraduate work at Vanderbilt, and received her MSN here in 2010. Throughout her career, she has dedicated herself not only to patient physical care, but also to their emotional well-being. Near the beginning of her career, at Children’s Hospital in New Orleans, she went the extra mile to provide counseling to patients’ families. She has continued along that vein in positions in Nashville, Maryland and Washington D.C.

Since 2012, Cynthia has used her “spare” time to treat wounded military veterans at Passport Health in Bethesda, Maryland. She is able to help ease the severe backlog of V.A. cases while providing health care, nutrition and fitness training for injured veterans.

Cynthia’s full-time position is as an NP at the Dermatologic Surgery Center in D.C. One of her patients there said this: “She was so nice, friendly and reassuring, that I immediately trusted her diagnosis. Cynthia does very much exemplify the absolute best in her profession.”

Recently Cynthia was honored by Washingtonian Magazine as one of 33 finalists for its Excellence in Nursing Award.