What would Florence think? 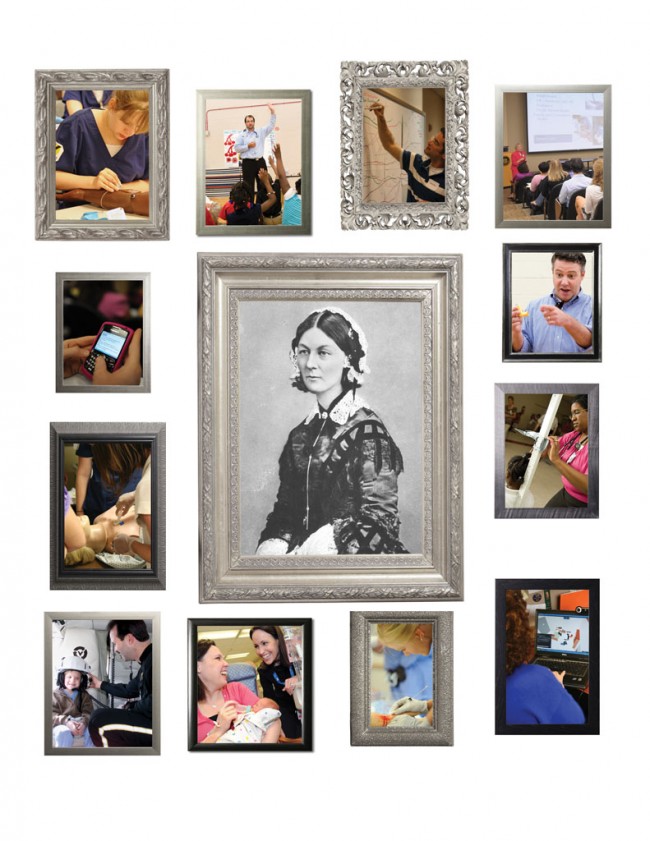 If you ask any nurse about Florence Nightingale, most will be able to say that she was the founder of modern nursing. And for many that is about the extent of their  knowledge. But this woman, who served as a catalyst for changing the view of health care and nursing, was more than the lady with the lamp known for tirelessly tending to injured soldiers in the dark of the night.

As nurses around the globe observe the 100th anniversary of the nursing icon’s death, did you know that Florence Nightingale:

“Florence Nightingale was much more, much bigger than nursing,” said Sandy Campbell, Ph.D., R.N., a professor of Nursing at St. Petersburg College who is well-schooled on Nightingale. “We claim her as the founder of modern nursing, but she was really a humanitarian, scientist, advocate, statistician, policymaker and caregiver.

“We talk about her today in terms of being a historical figure and a leader, but her theories and philosophies in nursing are still being utilized today.  Florence Nightingale is as relevant as ever.”

Campbell, a 1969 graduate of the Vanderbilt University School of Nursing, has developed a presentation on the nursing pioneer. In costume, she delivers a rousing synopsis of what Nightingale would think about nursing today. Most recently she performed “Nightingale on Nursing Now” for the Florida Nurses Association Centennial Celebration and Convention.

“We have come full circle with the way she approached nursing,” Campbell said. “She had a very holistic approach to patient care. Like Nightingale, we continue to focus on the total patient, which for us means considering the impact of everything on healing and caring, including family, environment, culture and diet.

“Our focus, rather than the medical model of curing, is on caring and integration of health care strategies and she initiated those ideals.”

Nurses are widely considered to be the universal caregivers in the world. With an estimated 15 million nurses worldwide and nearly 3 million practicing in the United States, nurses have a unique ability to impact both the people they are charged to care for as well as the policies that govern how they carry out their duties.

Nightingale has been credited for creating that legacy for the nursing profession.

So just who was Florence Nightingale?

Born in 1820 to an upper-class English family, Nightingale was named after the city in which she was born – Florence, Italy. Despite the objections of her family, Nightingale rejected the usual path of a wealthy Victorian woman which was to marry, have children and tend house, to pursue her interest in nursing. She believed she had a calling to become a nurse and later dedicated her life to establishing nursing as a profession.

It wasn’t until Nightingale was 31 that she was granted permission by her father to study nursing at Germany’s Kaiserworth School. In 1854, after a year as a unpaid superintendent of a London “establishment for gentlewomen during illness,” she and 38 nurses were recruited by the Secretary of War to tend to Britain’s wounded military in Turkey  during the Crimean War. It was during this time that Nightingale made her most famous contribution to nursing.

It was also here that she earned the moniker “Lady with the Lamp” for her nighttime rounds on patients. While tending to the thousands at the military hospital, Nightingale began collecting data about the mortality rates of British soldiers. In February 1855, the mortality rate at the hospital was 42.7 percent. After improving hygiene and sanitation among the soldiers, the mortality rate significantly dropped.

Because of her impeccable notes and record-keeping practice, Nightingale was able to use statistical data to change the way military and eventually city hospitals were run. She is lauded as a pioneer of nursing and as the catalyst for hospital sanitation reform.

“What she did with charting, data collection and presentation is what we call evidence-based practice,” said Campbell. “She learned that in order to have a long-lasting effect she had to have evidence to support her theories. She kept scrupulous records so that she was able to quantify and qualify her information.”

Few are aware that she invented a diagram or chart to reflect the changing patient outcomes in the military hospital. She used this polar area chart, known today as the pie chart, to describe the nature and enormity of the appalling medical conditions of the war’s wounded. 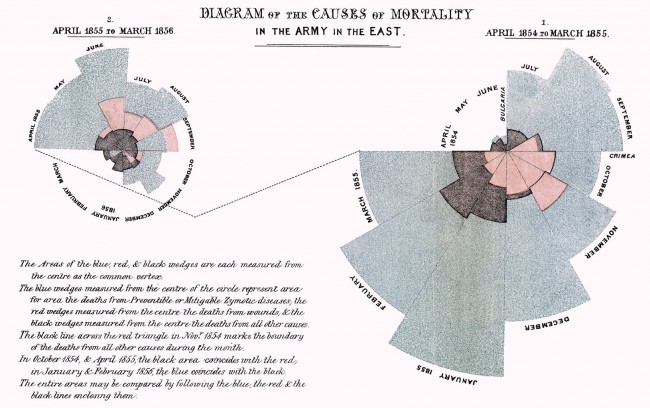 Then and Now: Florence Nightingale developed the original “Diagram of the Causes of Mortality” in the Army in the East in late 1858, using data to show that most of the soldiers who died during the Crimean War died of sickness rather than wounds. Today, statistics are the cornerstone of nursing research, but her influence doesn’t stop there. She was a pioneer in what today’s nurse refers to as community health and her political advocacy in the 1800s still inspires nurses to get involved in state, local and national political arenas.

“She was a leading statistician in her era,” said Campbell. “All nurses are involved in some form of data collection. We use it to determine the value of nursing and to make improvements in patient care.”

Nightingale went on to become a Fellow of the Royal Statistical Society in 1858 and an honorary member of the American Statistical Association in 1874.

Nightingale emphasized the need to educate women in the pursuit of a nursing profession. The first nursing training program opened in 1860 – the Nightingale School for Nurses at St. Thomas Hospital in London. Nurses were trained to work in hospitals as well as teach.

Nightingale left an indomitable imprint on the nursing profession.

“She truly opened up a world of nursing,” said Judy Sweeney, M.S.N., R.N., associate professor of Nursing at VUSN. “She put her ideas into practice. She was really ahead of her time.

“Even today with all the machines, technology and medicines, cleanliness, environmental control, diet, and caring for the whole patient (getting to know them and their families) are the key components to healthy recovery. She came up with that.”

Sweeney has spent her entire collegiate, graduate and professional career at Vanderbilt. As an alumnus of Vanderbilt University (1970) and VUSN (1975), she began teaching soon after earning her Master’s in Science in Nursing degree. She is now a pre-specialty level director who incorporates Nightingale’s history into her curriculum.

She too has been known to don the Florence Nightingale attire to teach the history of their role model.

Much has happened in the more than two centuries since Nightingale’s novel approaches to health care were revealed. With all the technological advancements, how would her nursing principles fare?

“She would be really happy with the technology that exists today because it improves patient care,” said Sweeney. “It helps the nurse do routine tasks faster and more efficiently and allows us to spend more time with the patient.

“Nightingale was an advocate for the patient, which meant nursing the sick, not nursing sickness. It’s the center of what we do.”

Much of her work is evident in today’s nursing practices. The impact is seen in acute care settings, community health organizations and global health care programs.

She authored many reports, books and guides on the topics of improving health, caring for the less fortunate and overall administration of health care organizations (hospitals, clinics, schools). She was able to challenge others to serve all of humanity and to develop a more universal understanding of the importance of health care for all. 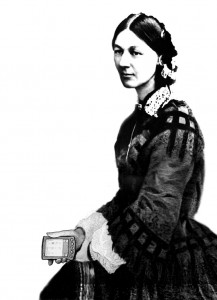 Although nurses are on the front line in terms of advocating for their patients (on an individual basis), Nightingale would argue that more needs to be done in the public arena, according to Campbell.

Nightingale was not afraid to use her connections with politicians and media to draw attention to health care disparities and concerns, and champion the need to improve health standards.

“She really knew how to use politicians, community leaders and the media to educate the masses about disease prevention, sanitation, health promotion,” said Campbell. “We need to be doing the same things. We need to be more involved with the political process. Nurses are key to health care and to reform measures.

“She really believed that everyone should have equal access to health care.

It goes back to when she did her triage work. It was not based on socioeconomic status or class. It was based on need for emergent care.”

In 1907 she became the first woman to receive the Order of Merit, and given the Honorary Freedom of the city of London in 1909.

The name Florence Nightingale is synonymous with nursing.

Sweeney said Nightingale would be pleased with nursing and with medicine as it works today – as a team.

“She would be so excited about the way nursing contributes relative information about patients so that better decisions can be made by the team to assist in recovery,” said Sweeney.

Campbell agrees, “She would say today that we stand on another precipice where quantum leaps can be made in improving the health and well-being of all. She would be pleased with the progress and no doubt suggest some changes.”

Vanderbilt University Medical Center hosted a series of  performances of “Hey Florence!” this year, a musical about the everyday lives of nurses, starring active-duty nurses from Vanderbilt, “Hey Florence! received a standing ovation at each performance,” said Donna Glassford, director of Cultural Enrichment and producer of “Hey Florence!” “A lot of people were amazed that nurses could…

This modified “Hippocratic Oath” was composed in 1893 by Lystra E. Gretter and a Committee for the Farrand Training School for Nurses, Detroit. It was called the Florence Nightingale Pledge as a token of esteem for the founder of modern nursing. I solemnly pledge myself before God and in the presence of this assembly, to pass… 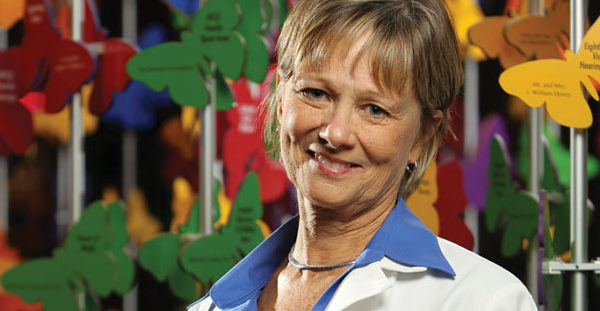 Mary Jo Gilmer, Ph.D., M.B.A., A.P.R.N., is a pioneer in the field of pediatric palliative care, helping establish the palliative care program at Monroe Carell Jr. Children’s Hospital at Vanderbilt, researching ways to improve care for those with life-threatening or life-limiting illnesses, and teaching a new generation of students that there is always some way to help.