Susie Adams, PhD, RN, PMHNP, FAANP, associate professor and director of the Psychiatric-Mental Health Nurse Practitioner program, received the International Nurses Society on Addictions, Excellence in Education Award.  She delivered the keynote address at the Japan Academy of Psychiatric and Mental Health Nurses National Conference in Yokohama where she served as consultant for the development of their psychiatric-mental health nurse practitioner curriculum.  Her other presentations include: Contemporary Psychiatric Forums in Nashville; American Nurses Credentialing Center and the American Psychiatric Nurses Association in Charleston, S.C.; American Nurses Credentialing Center and University of Texas in Arlington; International Nurses Society on Addictions Annual Conference in Albuquerque, and the Association for Medical Education and Research in Substance Abuse in Washington, D.C.  She and Dawn Vanderhoef, MSN, RN, lecturer in Nursing, presented “Treatment Needs of Women Offenders: The Case for Integrated Primary and Mental Health Care” and “Web-Based Clinical Log: The Pathway to Student Portfolio Develop, Program and Curricular Changes” with Jeff Gordon, PhD, professor of Educational Informatics of Nursing, at the National Organization of Nurse Practitioner Faculties conference in Portland, Ore.

Amy Bull, PhD, FNP-BC, assistant professor of Nursing, was published in The Journal for Nurse Practitioners for “Screening for Intimate Partner Violence: Offering the Tissue Box” and “Screening for Bipolar Disorder in Primary Care.”  She received the Julia Hereford Award from the School of Nursing and is a consultant for the Tennessee Office of General Counsel to the Board of Nursing

Colleen Conway-Welch, PhD, CNM, FAAN, dean, was named as one of Modern Healthcare’s “Top 25 Women in Healthcare” as well as Nashville Medical News’ “Women to Watch.”  She was awarded CABLE’s Women on Boards “Board Walk of Fame,” Nashville Business Journal’s “Women of Influence,” the Maier Award from the Comprehensive Care Center, and the Policy Champion Award from the National Nursing Centers Consortium (NNCC).  Conway-Welch presented at the NNCC in Philadelphia and the Council on Aging in Nashville, and delivered the commencement address at American Sentinel University in Denver.

Karen D’Apolito, PhD, APRN, NNP, professor of Nursing, was elected to the Board of the National Perinatal Association.  She presented at the Neonatal Abstinence Syndrome workshop in Gainesville, Fla., as well as at workshops in Sarasota, Fla., Columbus, Ohio, and Knoxville, Tenn.  She will present a poster this June at the Association of Women’s Health, Obstetric and Neonatal Nurses convention in Nashville.

Sarah Fogel, PhD, RN, associate professor of Nursing, published “The Experience of Group Weight Loss Efforts Among Lesbians” in Women & Health.  She wrote a chapter for “Lesbian Health 101: A Clinicians Guide,” and presented at the Gay and Lesbian Medical Association Conference in Washington, D.C.

Mary Jo Gilmer, PhD, MBA, CNS, CNL, professor of Nursing, gave the keynote address and three other presentations at the Pediatric and Neonatal Nursing Conference in Florianopolis, Brazil. She spoke with the PhD students at a university in Florianopolis there where she is collaborating on a book to be published in Portuguese.

Margaret Head, MSN, MBA, RN, adjunct assistant professor of Nursing, was selected to the American Medical Group Association Board, breaking ground as the first registered nurse and nurse executive on the board.

Lynda LaMontagne, DNS, MS, RN, was named Professor Emeritus after retiring as tenured Professor in the School of Nursing after 20 years.  LaMontagne served as director of the Child/Adolescent Clinical Specialist program and was one of the original developers of the PhD in Nursing Science Program.

Jana Lauderdale, PhD, RN, assistant dean for Cultural Diversity, presented “Native American Nursing Education Considerations” at the Dimensions of Diversity in the Health Professions Regional Meeting sponsored by Health Resources and Services Administration Bureau of Health Professions in Atlanta. She was also winner of the Margaret Cuninggim Women Center’s Mary Jane Werthan Award at Vanderbilt University, which honors an individual who has contributed to the advancement of women at Vanderbilt on a systematic level.

Melanie Lutenbacher, PhD, MSN, associate professor of Nursing and Pediatrics, was inducted into the American Academy of Nursing, as one of its 2009 Fellows.

Donna McArthur, PhD, FNP-BC, FAANP, professor of Nursing, received a $750,000 grant from Health Resources and Services Administration to expand the doctor of nursing practice program at Vanderbilt.  She presented at the University of Maryland School of Nursing in Baltimore; and with Jeff Gordon and Betsy Weiner, senior associate dean for Informatics, at the American Academy of Nurse Practitioners national conference in Nashville.  McArthur, along with Susie Adams, Randy Rasch, and Trish Trangenstein, professor of Nursing, participated in a panel at the annual conference of the National Organization of Nurse Practitioner Faculties in Portland, Ore.  She served as consultant on a grant for Madonna University in Livonia, Ill.

Shelagh Mulvaney, PhD, MS, assistant professor of Nursing, presented the results of a YourWay adolescent diabetes Web site intervention to the International Society for Research on Internet Interventions in Amsterdam, Netherlands. The results of that research were published in Diabetes Care.

Bonnie Pilon, DSN, RN,senior associate dean of Faculty Practice, was named a “2010 Women to Watch” by Nashville Medical News for her passion for reaching out to under-served populations and modifying health care delivery.

Randolph Rasch, PhD, FNP, FAANP, and Susie Adams published “Perceptions of Injection and Sexual Risks for HIV among African American women who use crack cocaine in Nashville, Tenn.” in Health and Social Work; “Racial Differences in Retention in Residential Substance Abuse Treatment:  The Impact on African American Men” in Research on Social Work Practice; and “The Experiences of African American Male Commercial Sex Workers At-Risk for HIV: Accessing Outreach Services” in the Journal of Gay & Lesbian Social Services, also with Adams.  Rasch was featured in Working Nurse for a special issue on men in nursing.  His presentations include: American Association of Nurse Practitioners annual conference in Nashville; Anita Thigpen Perry School of Nursing at Texas Tech University Health Sciences Center in Lubbock; Sigma Theta TauResearch DayandMary T. BoyntonLecture in Knoxville, Tenn.; and Michigan State University College of Nursing.  He served as External Reviewer for the doctor of nursing practice program at the University of Texas Medical Branch College of Nursing in Galveston, and for the doctor of nursing practice proposal for the New York University College of Nursing.

Mavis Schorn, PhD, CNM, associate professor of Nursing and Program Director, published in theJournal of Midwifery and Women’s Health, Journal of Advanced Emergency Nursing, and Journal of Alternative and Complementary Medicine.  She presented at the Directors of Midwifery Education Meeting in Denver and the American College of Nurse-Midwives in Seattle.

Betsy Weiner, PhD, RN, FAAN, received an endowed chair as the Centennial Independence Foundation Professor of Nursing and was elected to the American College of Medical Informatics.  She presented at Nursing Informatics in Helsinki, Finland, which resulted in the following publications: “The Emerging Role of Educational Informatics,” with co-author Trish Trangenstein, and “Nursing Informatics for Future Nurse Scholars: Lessons Learned with the Doctorate of Nursing Practice,” with co-authors Jeff Gordon, Donna McArthur and Trish Trangenstein, both in Connecting Health and Humans: Proceedings of NI2009, the 10th International Congress on Nursing Informatics. Weiner presented at the Sigma Theta Tau Biennial Convention in Indianapolis.  She received two grants as principal investigator: $1.3 million from HRSA to provide faculty development in the areas of informatics, simulation and telehealth, and $1.6 million from HRSA to develop simulation management software for nursing faculty using the innovative Second Life environment. 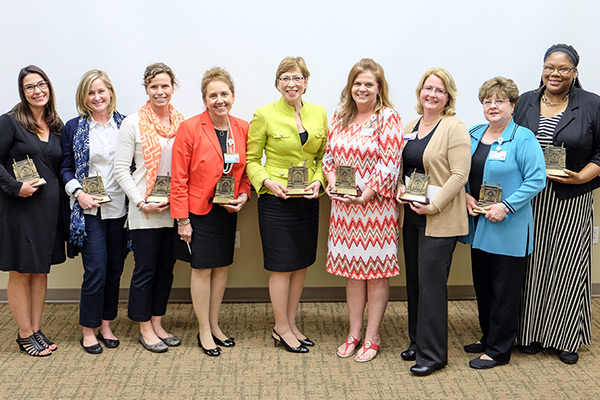 School of Nursing faculty and staff recognized with spring awards

40s Eunice Moe Brock, BSN ’41, is writing a book, “Search for a World View that Will Harmonize Science and Religion,” about her years living and working in China. Martha Crews McBurney, BSN ’47A, is a retired professional who enjoys traveling with her husband. Bess Winchester Isaacs, BSN ‘47B, enjoys working at the family hardware…