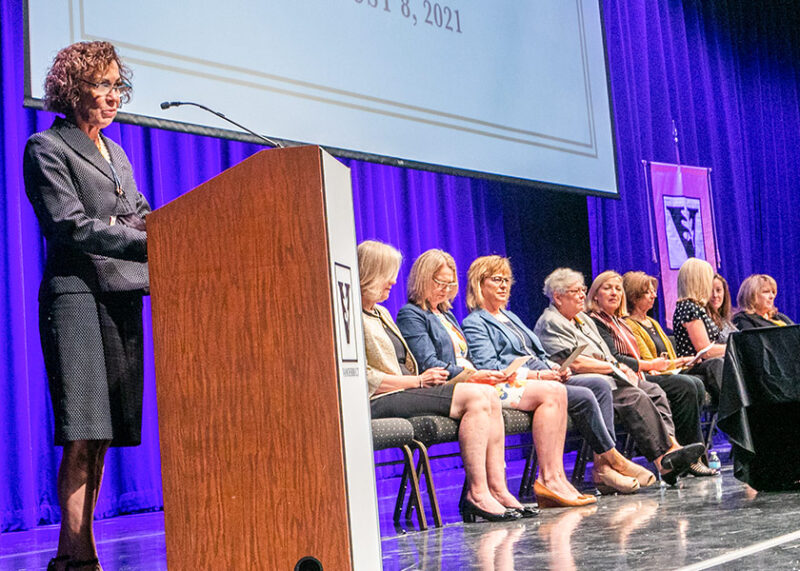 The School of Nursing held August pinning ceremonies in person on Sunday, Aug. 8. More than 300 MSN, Post-Master’s Certificate and DNP students in 10 specialties received the VUSN pin, certificate or lavalier during the first in-person pinning held since December 2019. Family and friends were able to attend the two events, held in Langford Auditorium, with masking protocols in place.

The events marked Dean Pamela Jeffries’ first school-wide ceremony since becoming dean on July 1, 2021. In addressing the students and guests, she outlined the traditions behind pinning and noted its significance in the nursing profession. “This milestone for nurses is eagerly anticipated and frequently seems more intimate and meaningful than graduation. For some of you, pinning recognizes your entry into the profession of nursing. For others, it recognizes your completion of a strenuous, challenging and fulfilling program of advanced nursing education,” said Jeffries, PhD, FAAN, ANEF, FSSH, the Valere Potter Distinguished Professor of Nursing. “For all, it provides an opportunity for your faculty, family, friends and colleagues to recognize your hard work, hard-won knowledge and bright future.”

A virtual pinning ceremony was held for those unable to be in Nashville. Overall, the School of Nursing recognized 343 master of nursing science, 16 Post-Master’s Certificate and 18 doctor of nursing practice students upon the completion of their programs.