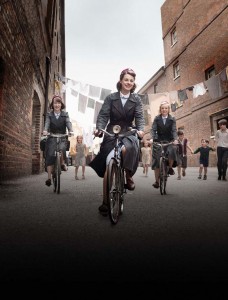 The School of Nursing’s Nurse-Midwifery Service and Nurse-Midwifery Academic Program came together to locally sponsor Seasons 1 and 2 of the PBS show Call the Midwife. The series is based on the memoirs of the late Jennifer Worth, who shares the world of midwifery and family life in East London in the 1950s.  The characters are nuns and midwives who live in Nonnatus House, a facility dedicated to the Anglican nursing nuns from early in the 20th century.  Between 80 and 100 babies are born each month in the neighborhood, and the midwives primary work is bringing safe childbirth to women.  The first season addressed variety of health
and societal issues.

Additionally, Buxton and Collins blogged about each weekly episode on the Nashville Public Television website. Comments included observations about the differences and similarities between midwifery care in the 1950s and now and comparing the culture of midwifery between the United Kingdom and the United States.  Cueing off the show, they discussed issues such as sexually transmitted disease, contraception and the philosophy of nurse midwifery care.

Call the Midwife Season 2 started airing in late March, with additional blogs by Buxton and Collins. To read the blog posts, visit: wnpt.org.