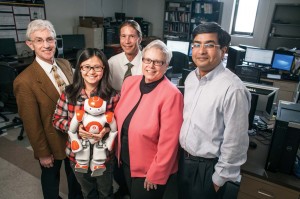 Vanderbilt University School of Nursing’s Lorraine Mion believes nursing resources are going to be stretched to their limits with a growing senior population.  To help shore up these anticipated gaps, she thinks robots can play a role in complementing or supplementing some senior care needs.  Collaborating with some of the best minds from the realms of engineering and geropsychology, an initial study is being launched to see how robots might successfully engage seniors with cognitive issues and dementia.

While there is ongoing work in this field, the Vanderbilt team is the first that has a robot that can dynamically adapt its own behavior based on what people are feeling.  It’s known as a closed-loop system, much like the way a driver’s behavior must adapt to other drivers braking or changing lanes on the road.
It all started with work by Vanderbilt Professor of Mechanical Engineering and Computer Engineering Nilanjan Sarkar, PhD, when he outfitted computer/robot users with biosensors and analyzed variations in blood pressure and skin response to evaluate emotions.  A personal experience led him to apply his work to young children with autism spectrum disorder (ASD). Sarkar, Jing Fan and Paul Newhouse, MD, director of the Vanderbilt Center for Cognitive Medicine, are now working with Mion and Greg Hunt, VUSN research coordinator, to see how the
man-machine interface might make a difference to seniors.

“Professor Sarkar’s work made me think, ‘how can we possibly supplement nursing workforce personnel in the long-term setting and from a cognitive and behavioral point of view?’” Mion said.  “So think about apathy, for instance. There is a high correlation between apathy and poor outcomes among older adults.  Perhaps robots could engage older adults, just like the children with ASD who responded to the robots.”
There are many types of robots in use today, including assistive devices for disabilities, such as smart wheelchairs or prosthetic limbs; for tasks such as lifting, carrying and doing laundry; and for mealtime, as in feeding systems or voice-controlled meal preparation.
This team is interested in how socially assistive robots, interactive machines that can aid with intellectual, social or emotional support, can help senior care.  They can provide companionship, entertainment, and even facilitate intellectual stimulation.
Enter: Nao, an off-the-shelf robot whose internal engineering has been modified by the Vanderbilt engineers to integrate with various cameras and sensors and work like one system.  Nao will approach wheelchair-bound test subjects, say its name and engage the older adult in a variety of activities, such as mild exercises (e.g. raising its arms), or singing a song.  If the older adult mimics the robot, Nao will follow up with a more challenging activity.  If the older adult does not respond, Nao will speak words of encouragement and try to engage further.  All the while, sensors will measure the older adult’s various body responses like heart rate and brain waves.
“If you had your own personal trainer, he or she would try to make the patient engaged, but also know when to back down if the patient is getting stressed out,” said Sarkar.  “We want Nao to have the same capacity, and see if this interactivity is making the seniors feel better psychologically and physiologically.”
As with most research, Mion points out there are many questions:  What will seniors think? Will they think the robot is a toy? If so, is that a good thing? What will nursing personnel think?  Will they see the robot as helpful, or an annoyance that gets in their way?
The initial alpha study with healthy older adults will start to answer these questions, followed by beta testing this summer.  There is no question that this is foundational research with many potential applications.  “The key is to find the most useful fit,” Mion said.
– Kathy Rivers

Todd Monroe is on a quest to figure out if and how people with Alzheimer’s disease feel pain. Thanks to a grant from the John Hartford Foundation and the Atlantic Philanthropies, Vanderbilt University School of Nursing’s Monroe, PhD, RN, is studying women with mild to moderate Alzheimer’s disease and healthy women to see how they…

Shelagh Mulvaney is on a mission to see how technology can help adolescents with diabetes.  She is working on the development and testing of several systems and programs, and won’t stop until she and her colleagues can figure out ways to help teens better self-manage their health. “Thanks in part to technology, we have many…