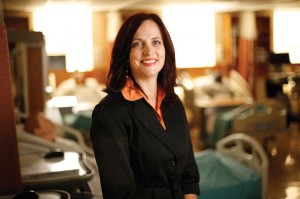 She’s been interested in medicine since she was a child growing up in South Africa. She was a high achiever with good grades who applied to medical school at a time when very few women were admitted, and, because of gender bias, was denied access entry. Dedicated to making a meaningful contribution in health care, she pursued her education in nursing.

A few years later when she was finally admitted into medical school, Stolldorf chose instead to continue her commitment to a career in nursing. She had heard that nurses in the United States were held in higher esteem than those in South Africa, so she began looking for opportunities to go abroad. In 1997, a travel nurse company sponsored her to take the NCLEX exam, and if she passed, contractually bound her to sign on for 18 months. She passed the NCLEX and reported to her first assignment in Sacramento, Calif., and after that, crossed the country on various assignments.

For the past 13 years, Stolldorf has worked in the Durham-Chapel Hill, N.C., area, most recently serving as a staff development specialist for a regional hospital system.

With her depth and breadth of nursing experience, Stolldorf is all too familiar with the tendency for hospital systems to churn out new initiatives with the promise of greater efficiency and higher value. She has seen too many of these well-meaning innovations start with a splash of excitement and support only to quickly fade into obscurity. She’s interested in innovations with staying power—those that can become embedded in the culture of nursing care delivery. And so she chose to study rapid response teams in hospital systems.

Rapid response teams were introduced in 2004 by the Institute for Healthcare Improvement. Many thought this approach of medical “SWAT teams,” to bypass the typical chain of command and intervene to provide lifesaving care, would have been adopted by a majority of hospitals by now. But that has not been the case.

“Rapid response is a little controversial because there are those who feel it is making a difference and others who don’t. Some studies show improvement in inpatient mortality rates following rapid response team implementation. Others don’t. There is a lot of anecdotal information about nurse satisfaction and nurse retention rates improving, but not any large scale studies to determine if rapid response teams really improve these outcomes,” said Stolldorf.

That’s why she dedicated her dissertation to sustainable innovations in hospitals, particularly delving into rapid response teams. Her research is based on a two-phased approach using quantitative and qualitative methods. In the first phase, she surveyed hospitals in the Southeast and the sustainability of their rapid response programs. Phase Two was a multiple case study approach that examined two hospitals with the strongest sustainability scores and compared them to two with the weakest numbers.

“I wanted to see when we implement something, how we actually get the benefits. What factors are barriers and facilitators to the sustainability of programs that were implemented with the goal to improve quality of care? In the case of rapid response teams, the lack of innovation sustainability may directly impact timeliness of care and patient safety,” said Stolldorf. “And, with the rising costs of health care, we have to use all of our resources judiciously.”

She did not anticipate similarities in sustainability factors between hospitals with high sustainability scores and those with low scores. The context of the work environment and work processes would ultimately determine high vs. low levels of the sustainability of the rapid response teams.

“I was surprised to see the degrees to which rapid response teams were embraced or not embraced in different hospital systems,” said Stolldorf. “We found that team members played a significant role in accepting this approach and that physician buy-in was crucial. The conclusion was that rapid response teams are not yet sustained as we’d like to see.”

Vanderbilt University School of Nursing’s Lorraine Mion believes nursing resources are going to be stretched to their limits with a growing senior population.  To help shore up these anticipated gaps, she thinks robots can play a role in complementing or supplementing some senior care needs.  Collaborating with some of the best minds from the realms…

As a researcher at Vanderbilt University School of Nursing, Michael Vollman, Ph.D., R.N., is examining the impact of depression in patients with heart disease, and especially those diagnosed with heart failure. “We have at least 10 years worth of solid research evidence indicating that once a patient with heart disease develops a clinically significant depression,…