9/23/2010 – Vanderbilt University Medical Center’s “promise” of the future is to personalize medicine for each individual patient — identifying each patient’s unique genetic difference, then making evidence-based decisions at the bedside to reflect these differences.

With the theme of “The Promise of Discovery,” Jeff Balser, M.D., Ph.D., vice chancellor for Health Affairs and dean of the School of Medicine, gave his annual State of the Medical Center Address Monday in Langford Auditorium, focusing on recent advancements in genetic medicine that will help define the future of health care delivery at Vanderbilt. Genetic differences at the molecular level not only contribute to disease processes, but can also significantly impact an individual’s ability to respond optimally to drug therapy.

Balser said Vanderbilt’s innovative leadership in all areas of research, education and patient care is not only timely, but also essential to progress. Prior investment in basic science research and electronic medical records systems, coupled with BioVU, the nation’s largest DNA databank, have made the promise of personalized medicine a reality for Vanderbilt.

Vanderbilt-Ingram Cancer Center is leading the country with its targeted therapy for lung cancer and melanoma, Balser said. VICC is the first cancer center in the Southeast to genotype adult patients’ tumors, individualizing therapy to the patient.

The Vanderbilt Heart & Vascular Institute is pioneering ways to treat heart disease so that each patient has the medicine that is best for their specific needs. Through the PREDICT Program, launched this week, VHVI’s doctors can select anti-clotting medication best suited for each patient.

Using the elevate Pillars to frame his presentation, Balser updated faculty and staff about the Medical Center’s performance during the past year.

Balser said he learned a great deal during his first year as vice chancellor, stating the potential for VUMC’s contributions and impact is actually beyond what he could have imagined as he began his tenure as leader for the Medical Center.

Under the People pillar, the Fall 2009 Community Survey shows VUMC’s overall job satisfaction now matching the ‘Best in Class Healthcare Norm’ at the 86th percentile. The national norm for employee workplace satisfaction in health care is the 75th percentile.

The Medical Center’s 18-month employee retention rate has increased 5 percent from fiscal year 2009 to 2010, now residing at 67.6 percent.
Balser credited nursing services for its residency program to attract and retain nurses as one of the principal drivers for improved employee retention.

Vanderbilt’s employee wellness program, Go For The Gold, has been successful increasing the physical activity among Vanderbilt employees with approximately 84 percent of faculty and staff reporting they exercise more than one day per week.

Balser stressed to all faculty and staff in attendance that everyone must re-enroll this year for the Vanderbilt Health Plan during the Oct. 1-15 open enrollment period.

“You can’t just let your health plan renew itself,” he said. Everyone must actively re-enroll, either on the Web or at one of the health plan fairs, to ensure they continue to receive health care benefits. Langford Auditorium was packed Monday for the State of the Medical Center Address given by Jeff Balser, M.D., Ph.D. (photo by Joe Howell)

Vanderbilt University’s health plan is self-insured, meaning the institution actually covers the cost of its employees’ health care, and as such is working toward becoming a national model for holding down health care costs. This year, employees earning less than $50,000 a year will see no premium increase for insurance coverage. Other employees who earn less than $200,000 will see a limited increase in their premiums. The University’s goal is to have little to no premium increase in 2012, Balser said.

“We are also working strenuously to control costs,” Balser said. “This year the overall increase in the cost of our health plan will be about 5 percent, that’s about half of what it has been in the last few years. It has been rising at a rate of about 8-10 percent. We are proud of this but this is not enough. We are going to try some other things that will continue to take a bite out of this cost.”

On a larger scale, there are more than 10,000 of VUMC’s patients who have high blood pressure. Balser said that potential savings through expanding the MyHealth Team pilot project to help avoid strokes, myocardial infarctions, and avoid unnecessary Emergency Department visits, could contribute savings of many millions of dollars for patients in this population over a five-year period.

Under the Service pillar, Balser said every outpatient service was asked to identify ways to increase the number of patients who can be seen within 15 days. In fiscal year 2010, 55.1 percent of new patients were seen within the 15 day timeframe, creating an increase of 2.6 percent over the previous fiscal year. This, in combination with improved clinic operations, has yielded nearly 11,000 slots for new patient appointments.

In the area of Quality, a highlight has been the improvements in patient satisfaction by Inpatient Psychiatry. The hospital now has an “Excellent” quality of care rating, improving from the 10th percentile in January to the 100th percentile by August.

The Vanderbilt Breast Center was recognized for its success implementing a range of strategies to reduce its diagnosis to treatment time from 50 days to less than 20 days. The Breast Center’s Overall Quality of Care scores for radiology services now approach the 100th percentile mark as well.

Also in the area of Quality, hand hygiene compliance has improved 38 percent during the past year, according to 23,000 direct clinical observations performed by trained audit teams.

“If we can get our observed to expected mortality to .65, and I believe we can, this would mean that an additional 72 patients would leave our hospital who don’t now,” Balser said.

Under the Growth and Finance Pillar, two areas that were combined last year, VUMC had a good year financially with revenue up about $40 million over the 2010 projections. About half of this is used for equipment, repairs and “paint on the walls” for Vanderbilt’s estimated 10 million square feet of space, 25 percent will go to new space such as major renovations and capital projects, while the other 25 percent will be used for savings.

The Monroe Carell Jr. Children’s Hospital is preparing for an expansion in the very near future to add 35 beds, a cardiac surgical intensive care unit, an expanded stem cell unit and interventional radiology unit. Balser said the goal is for the crane to be up by the end of football season.

The Vanderbilt Heart & Vascular Institute is renovating space for more cardiac catheterization labs and will no longer have to use the existing cardiac cath mobile unit in front of Vanderbilt University Hospital.

In the area of Innovation, in addition to the personalized medicine initiatives, a group of nearly 100 faculty and students are working together on a project to create a new model for medical school curriculum that meets the health care challenges of the future.

The highly successful new Program in Interprofessional Healthcare Learning, which utilizes team-based approaches to health care education with students studying to be nurses, physicians, pharmacists, and social workers, is a key building block for the future.

To give feedback or suggestions on how to make the Medical Center a better place, the suggestion box is available online at www.mc.vanderbilt.edu/suggestionbox.

Members of the Julia Hereford Society (JHS) attended a special celebration recognizing their support of the Vanderbilt University School of Nursing in April. The event was hosted by Dean Linda Norman and organized as a way to honor and thank JHS members for giving to VUSN. JHS is the School of Nursing’s donor society, dedicated… 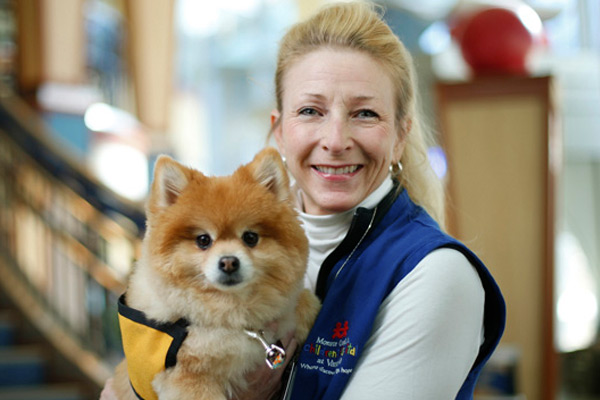 VUMC prepared to thrive in era of health reform