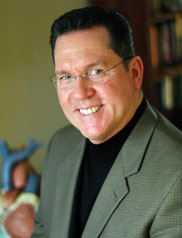 As a researcher at Vanderbilt University School of Nursing, Michael Vollman, Ph.D., R.N., is examining the impact of depression in patients with heart disease, and especially those diagnosed with heart failure.

“We have at least 10 years worth of solid research evidence indicating that once a patient with heart disease develops a clinically significant depression, things get very complicated,” said Vollman, assistant professor of Nursing. “Their clinical trajectory worsens due to a number of psychosocial, behavioral and biological factors, some of which we are just now beginning to explore and understand.”

Through his secondary research faculty appointments in cardiovascular medicine and psychiatry, Vollman is working  with colleagues around the Medical Center trying to sort out this critical issue because depressive symptoms impact morbidity and mortality, as well as decreased quality of life.

Complicating the issue, a significant number of patients do not respond to conventional depression treatments, and results from earlier clinical trials are inconclusive about the most effective treatments for co-morbid depression in patients with heart disease.  So, researchers are now focusing on identifying personal and environmental factors that affect a patient’s response to depression treatments.

Vollman’s future research plans include a pilot study testing the effectiveness of nurse-administered depression treatment interventions in community-living patients with heart failure. He also sees an opportunity to design studies that target the effects of depressive symptoms among newly diagnosed patients with heart failure as these patients have a higher prevalence and greater severity of depressive symptoms.

Finally, he hopes to collaborate with colleagues in the Medical Center’s Department of Pharmacology in exploring potential myocardial protective effects associated with use of some anti-depression medicines.

He admits, however, that while research focusing on heart disease and depression is promising, it also is very humbling.

“Our research participants are absolutely amazing,” he said. “More often than not, they tell me they want to help so the next generation of patients with heart failure will have better treatments and a better life.”

Spotlight on Nursing Research//Lymphedema in Head and Neck Cancer Patients

The road to further nursing research and higher education for Jie Deng started with the 2003 SARS outbreak in China.  At the time, Deng was the Associate Chief Nursing Officer at Peking University Health Science Center in Beijing. “Our nurses were incredible – the sacrifices they made for their patients. We had very limited knowledge…

Spotlight on Nursing Research/Swelling in Head and Neck Cancer Patients

Sheila Ridner, PhD, MSN, wants everyone to know that lymphedema (swelling) doesn’t just happen to breast cancer survivors.  So, she’s expanding her research to head and neck cancer patients. “This work is so important because lymphatic damage and the fibrosis happen from the shoulder to nasal area where our mechanisms for swallowing, nourishing and breathing…