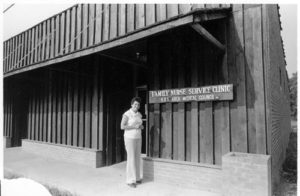 It was only going to be for a few years. Carolyn Whitaker, BSN ‘62, MSN ‘72, agreed to serve as the primary health provider in Red Boiling Springs, Tennessee, for a few years, and then she would return home to Nashville to work.

That was the condition she agreed to when she accepted an Appalachian Region Commission Scholarship grant to help finance her Master of Nursing Science degree at Vanderbilt University School of Nursing in the early ‘70s.

“There was no health care provider or drugstore in the town,” she said. “I took care of anybody that came in. I probably served 6,000 patients in the region. My clinic was next door to the post office, which was very nice because we didn’t have any laboratory service, and I had to mail everything to the state lab.”

Whitaker ran the clinic with one assistant and a volunteer who helped clean. She worked five and a half days a week and it wasn’t unusual for patients to show up at her farmhouse in the middle of night. “And I made house calls—this was before home health, before we had any emergency service in the county,” she said.

“Nobody knew what a nurse practitioner was then,” she said. “Everything was on a cash or charge basis and I charged the same fees the doctors in the region charged for office visits.”

In addition to providing primary care, she did a lot of health education. “There was a tremendous need for health knowledge in the area and I did a lot of health teaching,” she recalled. “I asked the people what they wanted, and they wanted to lose weight. So we started a weight loss program up at the school gymnasium and we met at night, once a week. There is a high incidence of diabetes in this region and so it was very good to have the weight loss program. It kept them healthy.”

Whitaker ran the clinic for eight years before joining her sponsoring physician in his practice. Soon after, Tennessee Tech University asked her to help set up a nursing program, and then to be one of its first faculty.

“When I came here, there were five registered nurses in the county,” she said. “We needed nurses and couldn’t get them to come to the area.” Today, she notes, Tennessee Tech has a top baccalaureate degree program, offers master’s degrees and is considering a doctoral program.

Whitaker is now retired and lives on the same storybook farm she bought soon after she moved to Red Boiling Springs. She stays busy with volunteer service and civic projects (running away from housework, she calls it), and remains a key part of the community.

“Do you know they still call me, not a lot . . . we have that much more health care in the area, but they’ll still ask me, ‘What should I do?’ and I tell them. Most of them do what I suggest or at least they put it into their decision-making mode. I’m seeing third and fourth generations among the people I live with.”

“I took care of a lot of people and they were so good to me. Everybody couldn’t have been nicer and helpful,” she says. “I could never go anywhere that I didn’t see my patients. That’s what they liked about me—that I lived here with them.”