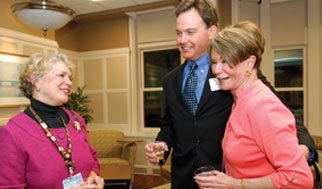 With the average debt load of a nursing student soaring to $80,000, the Julia Hereford Society (JHS) has rededicated itself to raising scholarship money for Vanderbilt University School of Nursing. Named after Julia Hereford, a 1936 graduate and Dean from 1949-1965, the group is composed of donors who give $1,000 or more annually to the JHS scholarship fund at VUSN.

“We have to do something about the debt load of nurses or the future of private schools of nursing is in jeopardy,” said VUSN dean Colleen Conway-Welch, Ph.D. “Ninety-five percent of our students receive financial assistance of some sort, so the funding we receive from the Julia Hereford Society is critical.”

“My family wanted to do something in honor of Colleen’s 25 years as dean. I’m able to do the work that I do every day because of her leadership,” he said. “Vanderbilt is the railroad line that quality rides on. That’s why the match is so important to me. We have the opportunity in 2010 to impact the School of Nursing like never before.”

Briley is a 1994 master’s graduate and founder and president of Primary Care Specialists-South in Jackson, Tenn.

“We really need to make a big dent in the debt load of our students,” said Jeff Balser, M.D., Ph.D., vice chancellor for Health Affairs and dean of Vanderbilt University School of Medicine. “We want students to not be limited because of their debt. We want them to pursue their dreams and lead.”

Both Balser and Conway-Welch had academic scholarships and say they would not be in their positions today without that financial assistance.