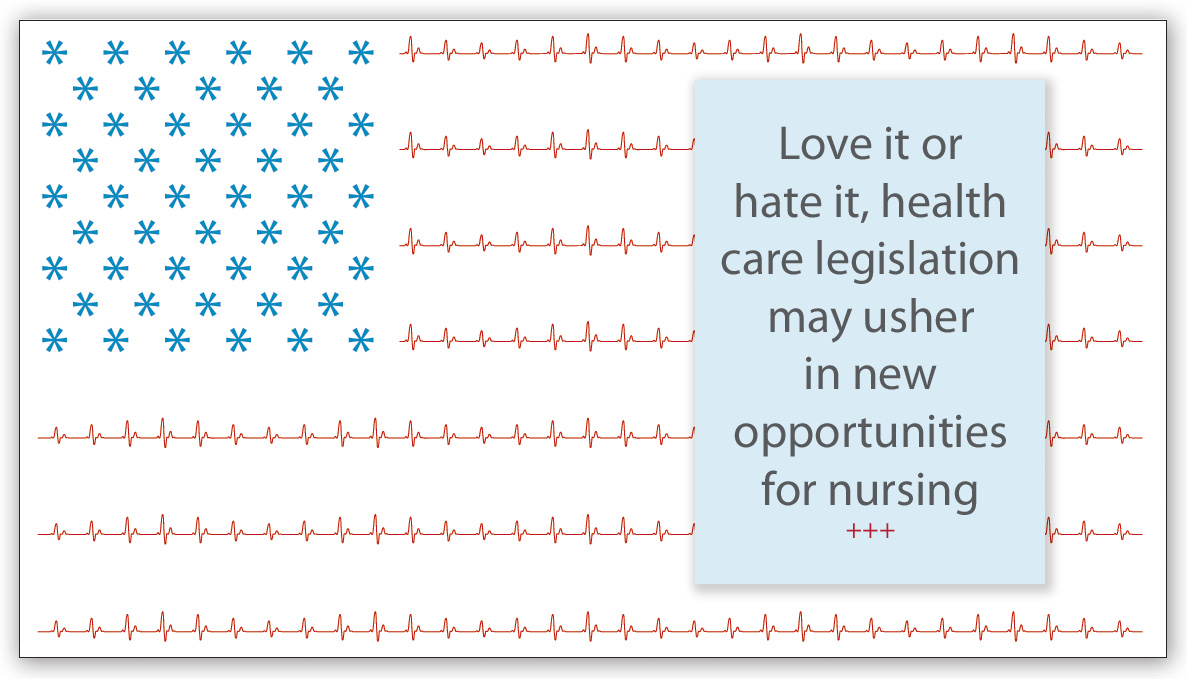 Health care reform aims to transform U.S. health care delivery into a more preventive, coordinated posture. While the law is still hotly contested throughout the country, most agree that whatever happens, it will usher in a new era of opportunity for nurses.

Under the provisions of the law, experts believe there will be more nurses practicing at the full scope of their license, the potential for pay equality with comparable providers, more nurse-managed community health services and more nurses involved in disease management.

A focus on outcomes
***
Based on a survey done early last year, the Centers for Disease Control estimated that 59 million Americans went without health insurance coverage for at least some part of 12 months preceding the survey. Access to coverage understandably dominated the public debate surrounding passage of the Patient Protection and Affordable Care Act, which became law in March 2010.

Major Access Provisions
According to a Congressional Budget Office estimate, under the provisions of the Accountable Care Act some 32 million more Americans will acquire health coverage by 2019. Read more »

Once the dust began to settle, cost and quality provisions in the law began to receive notice. According to Barbara Safriet, JD, a specialist in health law and policy, a visiting professor at Lewis and Clark Law School in Portland, Ore., and retired Associate Dean of Yale Law School, the Accountable Care Act has the potential to have far greater effects on health care delivery than the enactment in 1965 of Medicaid and Medicare.

“Well that, in this country, is pretty revolutionary,” Safriet said.

The new law adds support across the board for nurse education and training, especially around primary care, and it allocates $11 billion over five years in new funding for community health centers, including new funds expressly for nurse-managed health centers.

However, the real impact on nursing seems to rest less with these much needed workforce provisions than with the law’s broader implications. In a recent talk at Vanderbilt University School of Nursing, Paul Keckley, PhD, executive director of the Deloitte Center for Health Solutions in Washington, D.C., summed up the implications of the law as a shift from volume-based payment to outcomes-based payment, a shift from health system fragmentation to health system integration, and the bridging of the gap between public health and the commercially insured delivery system.

“There are some hanging chads here, some stuff that could blow up and go in opposite directions. … Every law goes through a process of fixing and amending and replacing,” Keckley said in his recent presentation at the School. Experts interviewed for this article say health reform will remain a work in progress for years to come.

In this first round, lawmakers did not order HHS (the Department of Health and Human Services) to pay physicians and nurses equally for primary care and specialty services (with one exception: physicians and nurse-midwives are now paid equally by CMS). They also did not cancel CMS payment rules that preclude nurses from independently certifying federal beneficiaries for long-term care or home health services.

“Remember the environment in which this thing got passed. I was holding my breath that anything would get out of Congress at all,” Pilon said.

“Although there are many provisions in the bill that are favorable to nursing, there continue to be some physician organizations that do not agree with an expanded scope of practice for APNs. But there are other groups with some pretty big audiences — the American Association of Retired Persons, the Institute of Medicine — that have different ideas about nurse roles,” Pilon said.

Safriet observed that, at least where Medicare and Medicaid are concerned, lawmakers and regulators appear in a mood to lift impediments for nurses.

“They raised reimbursement for nurse-midwives from 65 percent to 100 percent of physician reimbursement. You can read into that. For me what it says is that we should be moving toward equal payment,” Safriet said.

“The bill will ask every provider – physicians, certified nurse specialists, nurse practitioners, respiratory therapists – to practice at the top of his or her license so that every team that comes into play on behalf of a group of patients can work at the top of its functionality. Regardless of details that may be missing in the law, that’s clearly going to emerge as an important aspect of this reform,” she said.

“As patients go from state to state and as more technologies like telemedicine are placed against the management of patient care, the need for standardization of practice across states is really great. That will ask the states to look at their nurse scope of practice laws really carefully. That’s going to be a big deal.”

New approaches to old problems
***
Larger providers apparently aren’t sitting on their hands while the details of health reform get worked out.

“(Health care reform) very well could be a bonanza for integrated health care delivery. And nurses are going to be heavily engaged in making that happen,” he said.

Major Cost and Quality Provisions
This modified “Hippocratic Oath” was composed in 1893 by Lystra E. Gretter and a Committee for the Farrand Training School for Nurses, Detroit. It was called the Florence Nightingale Pledge as a token of esteem for the founder of modern nursing. Read more »

Another group at Vanderbilt is developing a post-discharge “outpatient ICU” for patients newly diagnosed with acute coronary syndrome. Using standardized medication management and health coaching, the program aims for optimum coordination of inpatient and outpatient episodes of care.

“This potentially significantly changes how nurses will focus their time. … Nurses will have to understand more about health coaching,” said Robin Steaban, MSN, RN, administrative director of Cardiovascular Services, who leads the project with Paul Sternberg, MD, assistant vice chancellor for Adult Health Affairs. Once testing is complete Vanderbilt will look to expand the program to other acute patient problems.

“If providers like Vanderbilt become accountable care organizations and take responsibility for costs across the spectrum, they’re going to have to manage the risk factors for a population better than they have been.

“I think it’s a huge opportunity for nurses,” Shurney said.

Keckley wrapped up his recent talk with a prediction about the Accountable Care Act.

“In 2012 we’re going to see somebody say, from the left, ‘This bill doesn’t really solve problems, let’s just go ahead and talk about a single payer system.’
“And from the right you’re going to have at least three candidates who’ll say, ‘If I’m elected, we’ll repeal this law.’

“And neither will happen,” Keckley said.

Sheila Ridner Ph.D., RN, FAAN, MSN, MSHSA, BSN, principal investigator of the PREVENT trial and the Martha Rivers Ingram Professor of Nursing at Vanderbilt University School of Nursing conducted an educational webinar series. The presentation proposed a new standard of care for health care providers and health plans that is aligned with the transition to value-based reimbursement.

VUMC prepared to thrive in era of health reform

Tom Scully, J.D., former head of the Centers for Medicare and Medicaid Services, said universal health care coverage is “probably a long way off.” Scully, who spoke at Vanderbilt University School of Nursing last week as part of the school’s Centennial Lecture Series, began working with the Senate in 1981 and was a chief health…