Spotlight on Nursing Research/Swelling in Head and Neck Cancer Patients 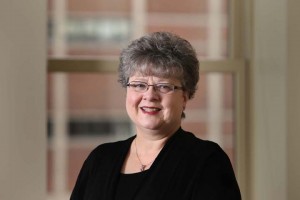 “This work is so important because lymphatic damage and the fibrosis happen from the shoulder to nasal area where our mechanisms for swallowing, nourishing and breathing are located,” said Ridner, VUSN assistant professor.

With the help of Joe Aulino, a neuroimaging clinical physician at VICC, the team determined that CT scans might be an appropriate way of measuring swelling and tissue changes in these patients.

Meanwhile, Deng was working with ENT physicians as they were using nasalpharyngeal scopes with their head and neck cancer patients.

“They were looking closely for the spread of disease, but did not pay close attention to fluid,” said Ridner.  “With Jie’s help, ENT doctors starting completing a checklist to document any fluid they saw over different anatomical structures down the throat.”

A second study, that included both internal and external examinations of patients, found nearly 75 percent of the patients had swelling three months  or more post-treatment – a figure that has resulted in VICC physicians beginning to use the same checklist in most all patients with head and neck cancer to catch swelling early.

The team put all of this information together in an R01 grant proposal for the National Institutes of Health. The four-year, $2.6 million grant, was awarded in July 2010.

“We are literally doing the first study in the world looking at the natural progression of fibrosis and lymphedema subsequent to head and neck cancer  treatment,” said Ridner.

The study involves recruiting 90 head and neck cancer patients before any treatment.  The team draws blood for genes and for inflammatory cytokines, scoping to see if there is fluid, conducts physical exams, and even collects psychological data.  All but the DNA testing are repeated at regular intervals up to 18 months post-treatment.

“We’re trying to figure out the trajectory of how this (fibrosis and lymphedema) plays out in people and who might be at risk,” said Ridner.  “If we can do that, then perhaps we could develop some targeted medical therapies to reduce the risk in some patients or refer others to preventive physical therapy.”

“The particular study is so groundbreaking because we are able to maximize the resources we have at Vanderbilt,” said Ridner. “We have identified a problem, determined that no one else is addressing it, and we will continue to expand what we are doing.”

With each study, Ridner is building a program of research to better understand swelling in upper limbs, trunk, head and neck and eventually lower limbs to see how swelling location influences the patient. The ultimate goal is to reduce the risk of developing lymphedema and develop improved ways to treat the swelling.

“We hope this is going to be something that will help a lot of people over time,” said Ridner.

Vanderbilt University School of Nursing (VUSN) has been awarded a four-year, $2.4 million grant from the National Institutes of Health/National Institute of Dental and Craniofacial Research to establish a valid, clinically useful measurement battery for head and neck lymphedema and fibrosis (LEF). Principal investigator Jie Deng, Ph.D., R.N., developed the proposal because she commonly sees…

Cancer is bad enough. But cancer patients who receive surgery, radiation and chemotherapy may suffer from side effects that run from irritating to crippling — problems that are postural, musculoskeletal and respiratory, along with lowered self-esteem. Many suffer from lymphedema, swelling caused by retained fluid in a compromised lymphatic system.

Spotlight on Nursing Research//Lymphedema in Head and Neck Cancer Patients

The road to further nursing research and higher education for Jie Deng started with the 2003 SARS outbreak in China.  At the time, Deng was the Associate Chief Nursing Officer at Peking University Health Science Center in Beijing. “Our nurses were incredible – the sacrifices they made for their patients. We had very limited knowledge…